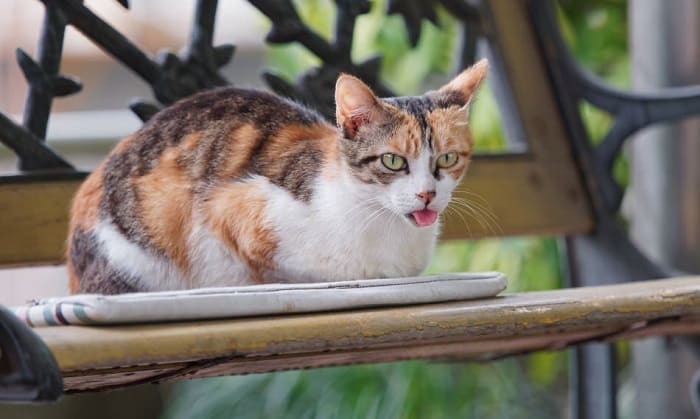 Cats are one of the cutest creatures in the world, and they’re even cuter when sticking out their tongue or doing the ‘blep’ as they say. However adorable this action is, there’s still the question of why do cats stick their tongue out.

Cats stick their tongue out for various reasons like resting, tasting, cleaning, and cooling down. It’s normal for cats to ‘blep,’ but it might also mean an irregularity in their health.

Reasons Why Cats Stick Their Tongues Out 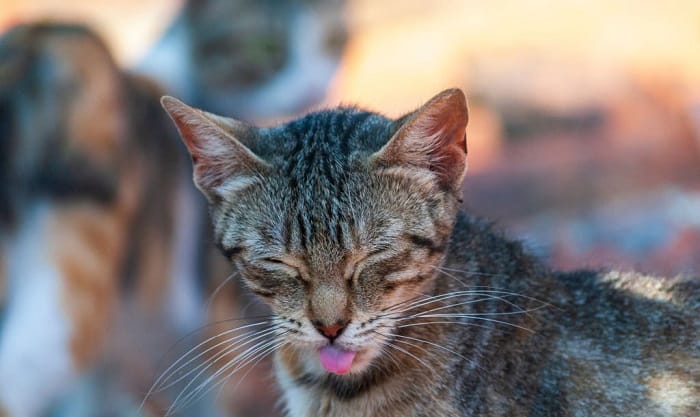 A cat’s tongue isn’t only used for tasting and grooming. They have a variety of uses, and this is all because of their structure!

About Your Cat’s Tongue

Unlike a human’s smooth tongue, a cat’s tongue will feel rough on your skin, similar to sandpaper. The rough feeling is because their tongue is layered with little keratin barbs called papillae.

Papillae are why your skin can get irritated when your cat keeps licking you in the same spot. These barbs would’ve been sharp enough to damage your skin if they were a lion!

Because a cat’s tongue has so many uses, you’ll often see them using them, so you’ll likely find a cat’s tongue hanging out a few times a day. So what are the reasons why cats stick their tongue out? Let’s find out!

8 Reasons Why Cats Stick Their Tongue Out 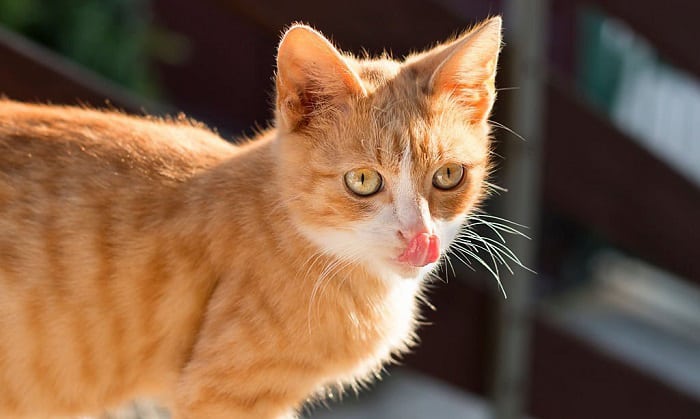 The Flehmen response is the simplest scientific explanation for a cat’s tongue hanging out. This response is a social behavior used to detect different chemical signals and occurs when your cat wants to investigate scents floating in the air!

Now, you may ask, why ‘scent’ when a tongue is meant for tasting? Cats have the vomeronasal organ, which can detect specific pheromones in the air. Cats can use this particular organ to scent many things, and the more familiar they are with smells, the safer they feel.

A cat’s tongue sticking out can happen when no teeth are blocking their way. A cat’s baby teeth can start falling when they’re around three to four months old, and soon a kitten with tongue out will be the norm. Don’t worry. It will grow back!

Older cats can also start losing their teeth, but they’ll be alright without them. A cat’s teeth are for canines, which are sharp to grab their prey. Often they don’t need to grind their food like omnivores or herbivores. 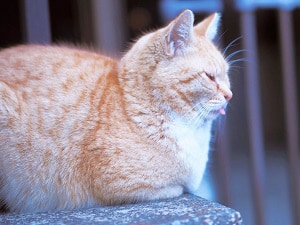 Cats go all the way when they’re in their resting state. Once they’re comfy enough while sleeping, their jaws will also relax along with their whole body, making an opening perfect for their tongue to peek out of their tiny mouth.

Cats only relax when they feel safe and comfortable, so it’s a great sign when you see your cat sleeping away while in the room. After all, a cat sleeps with tongue out when they’re in the deepest of sleep!

This relaxed behavior can also happen when you pet them, their eyes squinting shut and their purrs going on in total volume when they enjoy a pleasant petting session.

There are certain breeds where genetic influence has made them change their face structure over time. Cat breeds with flat faces or short noses have different jaws than regular cats. Their short jaws leave little room, and because of this, you’ll have a cat lethargic tongue out.

5. There’s something stuck on their tongue

Since they have barb-wired tongues to snag things, cats often find themselves disturbed by either food remnants or hair strands. If something is stuck on their tongue, they’ll try to get it off with the cat mouth open tongue out technique.

It can also happen if there’s an unpleasant taste from something they’ve just eaten, or they ate food that didn’t do well with their stomach.

When this happens, a cat will stick their tongue out repeatedly. However, remember that this should only last for a minute or so. Any more than that, then it might be due to something else.

Just like dogs, cats also use their tongues when they need to cool down, but unlike them, cats usually don’t pant often. When cats start panting like dogs do while playing, they’re already very hot. Cats can cool down by panting when they let the saliva on their tongue evaporate.

Yep, cats can have motion sickness just like how humans can! When a cat goes through motion sickness, it will stick its tongue out. They’ll show their dizziness by having their tongue and panting, but this time it won’t be because they’re hot.

Motion sickness can occur when a cat is in an unfamiliar area, inside a moving vehicle, or even when they remember a traumatic experience. They’ll be panting and drooling, waiting to get back to the peaceful surroundings they’re accustomed to.

8. Effects of poisoning or infection

Cats have a strict diet and, like other animals, have particular food they’re not allowed to consume. A cat sticking tongue out can be a sign of poisoning if they’re drooling more than they usually do. They’ll start feeling bothered and stick out their tongue to relieve themselves.

If it’s not poisoning, they may also have infections. These infections can occur in their nose or throat and share similar symptoms to poisoning. You can tell if a cat is having difficulty breathing when its tongue wags slightly when attempting to take in a breath.

Keep an eye out for teary eyes, fevers, and dizzy and uncoordinated behavior because these can be a symptom of infection.

There can be many reasons a cat would have its tongue hanging out. Their behavior could be either for common biological reasons or irregularity. So, you must stay attentive and notice the differences in each detail of this adorable display!

Now that you know the answer to the question ‘why do cats stick their tongue out,’ make sure you remember this knowledge for the future.

How to Get Rid of Neighbors Cats in My Yard? (7 Ways)

What Do Cats Dream About During Their Sleep?