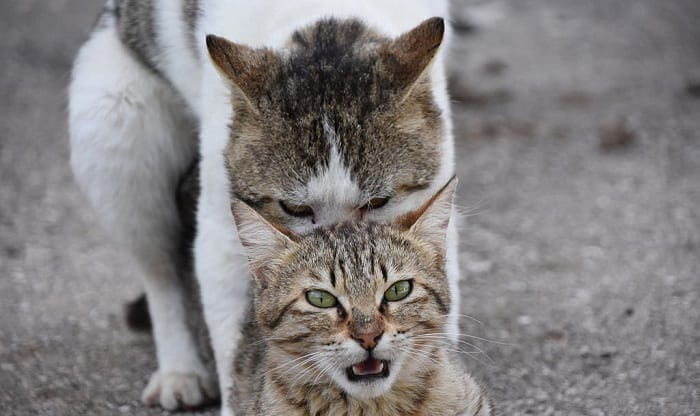 It is normal for cats to mate and reproduce. But then, when you happen to witness the mating, you can’t help but wonder, “why do cats scream when mating?”

Reasons for Cats Scream When Mating

When cats are in heat, cat owners can be a little uncomfortable about it. This is because their fur baby is now an adult and in need of the company of another feline.

Mating is natural for cats and it will happen except when your cat is neutered or spayed either before or upon it reaches sexual maturity.

In general, female cats reach sexual maturity at about 5 months old up to 9 months and have an average of 5 to 7 days of being in heat per month if not spayed. But, this differs from one cat to another.

Unspayed female cats, also known as queens, are most likely to produce a screaming cat sound even at the age of around 4 months old. This is because, at this age, some female cats are open to mating and are already considered in-heat.

Some noticeable signs that your feline cat is ready to mate are the following:

These cats mating sounds might get even worse when the female cat gets nearer and nearer to her ovulation and is ready to reproduce. They will most likely be a little desperate to find a mate.

The above-mentioned signs could be the indicators that your female cat wants to attract a male cat that she can mate with. This differs from cat to cat though.

Some cats meow louder than other cats. So, your neighbor’s female cat might have louder cat sounds than your feline cat to attract mates.

When a female cat finally meets a male cat, it is a bit awkward for cat owners to hear their cats mating noise. This leads to a stream of questions like, “why do cats scream so loud when mating?”

Your cat screams while mating due to the reproductive organ of the male cat. A male cat’s penis has tiny spikes around the end of its reproductive organ. These spikes provide stimulation for a female cat to ovulate.

These spikes are necessary for the female cat’s ovulation and eventually make it possible for her to reproduce. Without this stimulation, the ovaries of the cat won’t be able to release eggs.

Cats scream when having sex accompanied by some aggressive behaviors. Usually, they get stuck together during the mating which usually lasts a minute or more.

When the male cat finally withdraws, the female cat will display more aggressive behaviors. This is because of the pain of the barbed genitalia of the male cat that she needed to endure during the mating.

The male cat may experience some attacks from the female cat as well and licking her genitalia for more than 5 minutes.

Are Cats in Pain During Mating? 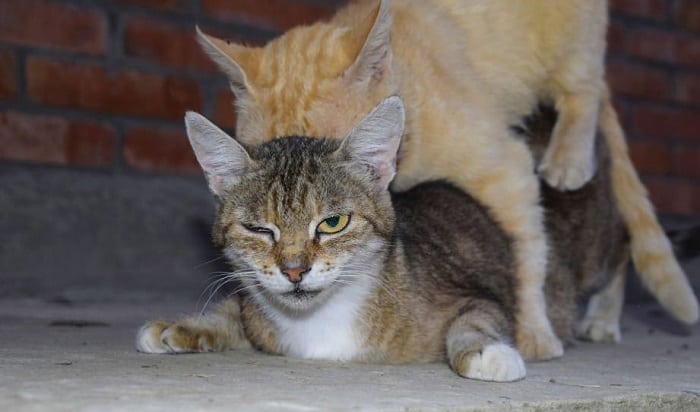 Yes, female cats tend to feel pain and this causes cats scream during mating. It is painful, especially for a female cat.

Although the female cat also has spiky genitalia, this does not give any pain or bleeding to the male cat. These tiny thorns are important for cats to reproduce. But, if cats only mate once, there is a low possibility that the female cat will get pregnant.

Why Do Female Cats Roll After Mating?

When your female cat rolls for no reason after mating, you might be weirded out why. The simple answer to this behavior is that it is a natural response for female cats to do so and is linked to the hormones due to ovulation.

However, this is not always the case. There are also other possibilities why a female cat rolls after mating. This includes the following:

Why Do Female Cats Cry When in Heat? 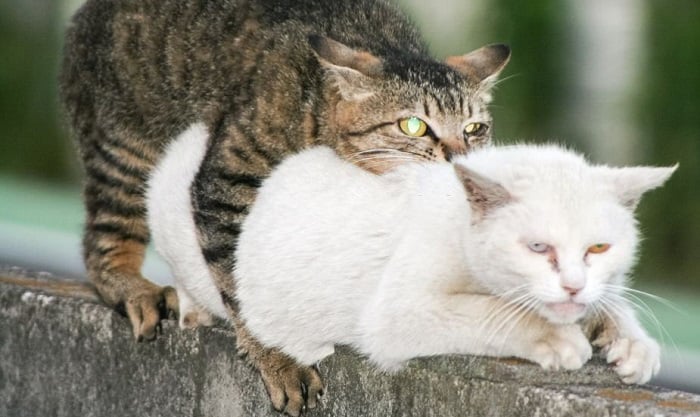 When female cats are in heat, they mostly express their desire to mate. One of the indications that your female cat is in heat is when it cries loudly.

This behavior enables them to call out the attention of male cats so that they can copulate.

How Often Do Cats Mate?

After satisfying herself with a male cat, a female cat will have another urge to mate but most likely with a different male cat.

Female cats tend to find another mate for the second or third round of their in-heat moments. So, even though it seems that female cats enjoy mating with their first Tomcat, truthfully, it’s not the case.

In general, female cats copulate with male cats up to 4 times in 2 days. Therefore, the kittens will have a high possibility of coming from diverse male cat genes.

Do Cats Stay in the Heat After Mating? 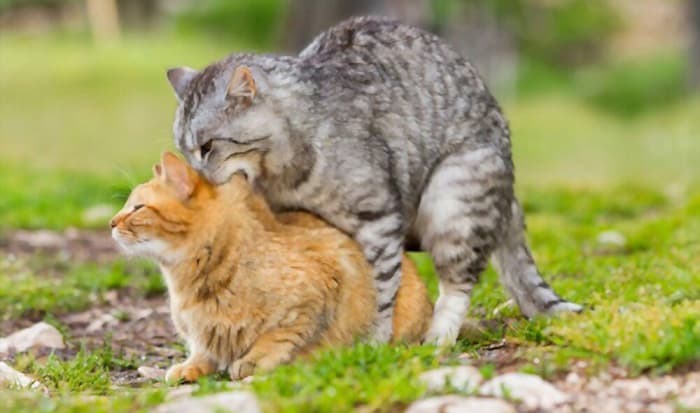 This depends on the cat itself. But usually, female cats who mated will be out of the “in-heat” season after a couple of days of mating.

But this is not the case for every female cat.

Once the mating happens, this causes and stimulates the ovulation of the female cat. From there, the female cat will start to experience a new hormonal cycle that encompasses its pregnancy.

Since the female cat is undergoing hormonal changes due to its pregnancy, it also ceases to experience the behaviors of an in-heat cat.

Maybe you are sleeping at night and you keep getting disturbed by your cats that always scream during mating. This pushes you to know, “why do cats scream when mating?”

There is nothing to worry about because your cat is doing normal behavior while mating. This scream is due to the male cat’s spiky penis that pains your female cat.

Instead of getting annoyed, let’s make sure that our feline friend has all the care it needs during and after the mating.

How Do I Stop My Cat From Peeing in the House? (6 Steps)

How Do Cats Get Ear Mites? – Symptoms & Treatment