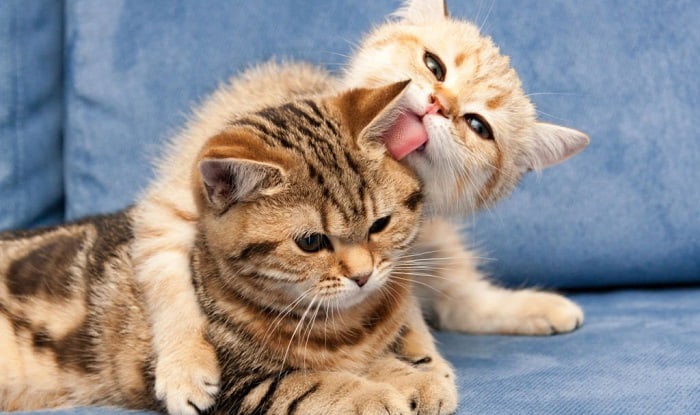 It’s one of the cutest things you’ll ever see when one kitten cuddles into another and starts licking its fur. As endearing as we find this attitude, there is a logical reason for it.

So why do cats lick each other? Most cats indulge in mutual grooming when dwelling in a cat colony or multi-cat home. It starts at a young age, beginning the practice with the mother cat. Allogrooming is also affected by dominance, social structure, and relationships.

Reasons Why Cats Lick Each Other 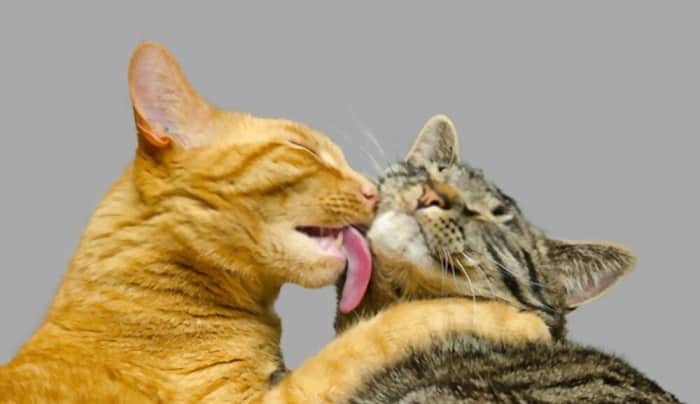 Cats are messy pets, and grooming is their standard mechanism to keep themselves clean. Most people have feline companions in their homes and have seen that cats groom themselves and each other.

Reason #1. To show love and affection

One of the most frequently observed reasons cats groom each other is to express affection, particularly toward their family members.

Cats commonly groom only other cats with someone they have a comfortable relationship with. The research found that cats are more inclined to groom other cats they recognize and groom their family members even more frequently.

Furthermore, grooming is a bonding experience for two cats. They share scents, assist one another in cleaning unreachable areas, and communicate how much they enjoy one another’s company.

So, when you see a cat licking other cat, the probabilities are they’re related or, at the very least, best friends!

Cats are extremely fragile when they are born. They’re deaf, blind, and their bodies are covered in blood. The mother cat makes up for it by allogrooming.

Kittens are greeted by their mother’s tongue after they are born. They are completely reliant on their moms for everything, even bathing. This is a symbol of affection as well as support from their moms.

Mother cats groom their infants as soon as they are born since the scents linked with pregnancy may attract predators. She does this to guarantee that the baby cat smells like them. This allows the mother to locate her infant by sniffing the scent swiftly.

Kittens can bathe themselves by the age of four weeks, and they will devote up to half of their life to keeping themselves tidy.

Even though cats are masters of grooming themselves regularly, they still can’t clean every inch of their body.

They use their feet to reach various places, and their bodies are quite flexible. Despite this, they are unable to clean their whole body.

They may require assistance from a sibling, friend, or pet parent at times. The most prevalent reason for cats licking each other is because of this.

It helps to have another cat’s teeth and tongue to remove dust particles, detangle matted fur, and brush wayward hairs. Imagine it like asking a friend to rub your back.

Cats will approach a person with whom they are acquainted and ask for much-needed assistance.

Although cats groom each other only if they’re pals, it may also symbolize dominance. Researchers discovered that “higher-ranking” cats inside a colony are more inclined to groom cats with low ranks, similar to how mothers lick their kittens. 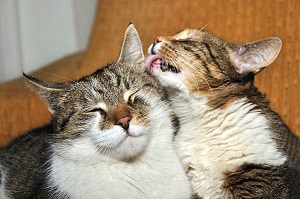 Cats are predators, so they may lick themselves to eliminate strong odors that would alarm their prey. Also, cats grooming each other dominance is a way of getting rid of the scent that bothers another cat.

Moreover, research says that cat licking another cat might be a technique of deflecting potential hostility when aggressive displays are too damaging.

In other words, the cat displays dominance by grooming the other cat rather than instigating a battle. 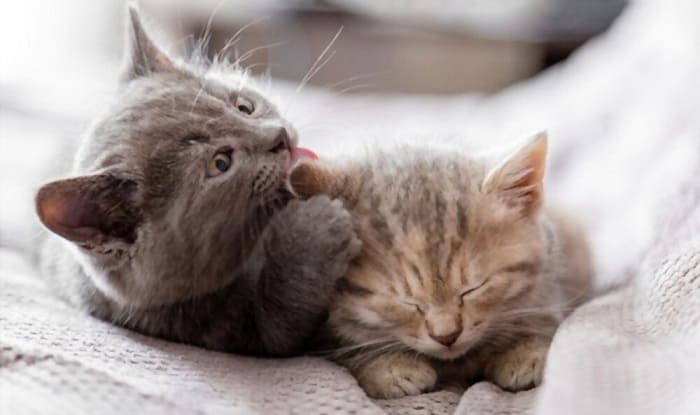 The act of a cat licking cat is an indicator of social recognition and bonding. They do not groom or want grooming from outsiders.

Allogrooming may be driven by a functional need for assistance with bathing. It is frequently to the head and neck, a section of their body they could not reach on their own.

Let’s take a look at some of the most frequently asked questions about why cats lick each other.

Is It Safe For Cats To Lick One Another?

Yes! Cats lick one another as part of their social system. They goom each other as a signal that they are welcomed as members of the colony.

Grooming may, however, be regarded as a symbol of authority within a group in some cases. It might also be a symptom of pent-up hostility in one cat, preventing him from being more violent towards another cat in the same pack.

It prevents infighting between cats within a specific colony in this situation.

Why Do Cats Lick Other Cat’s Private Areas?

Adult cats licking one other’s private parts is a technique for them to help keep themselves tidy.

However, the explanation for kittens may be slightly different. Aside from grooming her kittens, mothers lick their kittens’ private areas to encourage them to discharge their waste.

When kittens are young, they usually do not have “the drive” to eliminate waste. The mother cat’s approach urging them to perform their private business is to lick them in their private area.

There is such a thing as proper grooming and over-grooming. There can be a problem if a cat is licking more than usual or appears to be licking and scratching a specific location.

The first step is to inspect their skin and fur for sores, bites, red spots, or wounds.

It’s a good idea to take your pet to the vet if you observe excessive grooming. By that, you really can figure out any medical issues, such as allergies or an illness that isn’t as evident.

Cats may be sociable creatures. Through this behavior, they, like humans, analyze other cats to see if they could get along, pose dominance, or show nurturing nature.

There are various possible answers for the query “why do cats lick each other”, but it all boils down to a feline’s technique of communicating for whatever reason. On the bigger scale of things, it’s most likely nature’s approach to maintaining order inside their community.

How to Restrain a Cat to Clip Nails: 3 Proper Methods

How to Get Rid of Stray Feral Cats Permanently? (7 Ways)