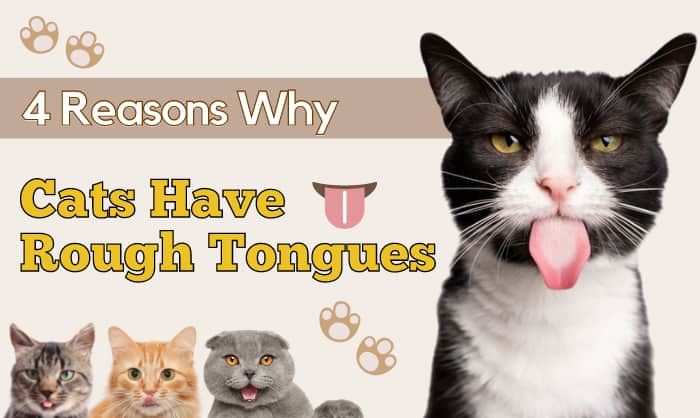 If you have been with your cat for a long time, it is possible that once or twice, your fur baby has tried to lick your skin. It made you wonder why cats’ tongues feel like sandpaper.

So, why do cats have rough tongues? A pet cat’s tongue has hair-like tiny spines called papillae, which are beneficial for their day-to-day life whether in grooming, eating, drinking water, or cooling down their body temperature.

What makes cats’ tongues rough is due to papillae which are made with keratin. Alexis Noel, a Georgia Tech researcher, stated that it has the same material as hair, claws, and nails.

The following are three main reasons to answer, “why are cat tongues spiky?”: 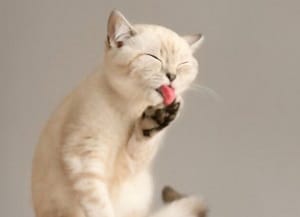 It serves as a hair comb.

The cat tongue papillae, which are backward facing the mouth of felines, are not visible to the human’s naked eye. Cats spend their time grooming themselves and these tiny bone-like spikes in their tongue are what they use in grooming.

These hollow spikes served as their comb to fix their covered coat and remove any dirt.

These gestures help them to take off tangles and to wipe out any parasites. Apart from this, the papillae play a role in oil redistribution to its coat.

That is why it is not advisable to wash your pets because this will trip the protective oil off their fur. Besides, they will still stick to licking themselves to reduce their natural odor, even after washing them.

Not only does the papillae help cats to maintain their smell and fix their hair, but it also helps in cooling down their body temperature to a normal level.

As your kitten licks its coat to groom, the saliva wetted on its surface coat eventually evaporates, leaving its body cool. This forms a cool temperature of up to 25% which is required for them to regulate their temperature against their warm body.

Since felines only sweat on the paws area, the grooming scheme plays a vital role in keeping in check their temperature.

Cats are known for being solitary hunters and predators. Its wide mouth has a nature designed to bite its prey. The spines on their tongue serve as a claw that helps in gripping their prey and eventually taking off the prey’s tissues and muscles.

That is also the reason why their tongue is an essential tool for consuming food. Since cats are known as carnivores, ripping up raw meat is their natural talent. Thanks to their sandpaper tongues.

Because of the wide opening of the cat’s mouth, it is hard for them to drink water like other mammals. This causes them to drool once they try to put water inside their mouths.

This is where one of the functions of the tongue comes in. With the help of the papillae, they can properly drink and lap water.

They tend to lap the surface of the water using the upper side of their tongue quickly to drink. This helps cats to receive the amount of water their bodies need.

Do Cats Have Hair on Their Tongue?

We have mentioned at the beginning of the article that cats love grooming and their spiky surface tongue helps in that habit.

But does this cause hairballs?

Many cats could have hairballs due to excessive grooming. Although hairballs do not pose any health threat to them because they most likely get puked by your fur baby, it also does not hurt to pay attention to how often this happens.

If you have noticed that your cat vomits frequently per week, it is best to consider bringing them to the vet.

What Happens When Cats Lose Their Papillae? 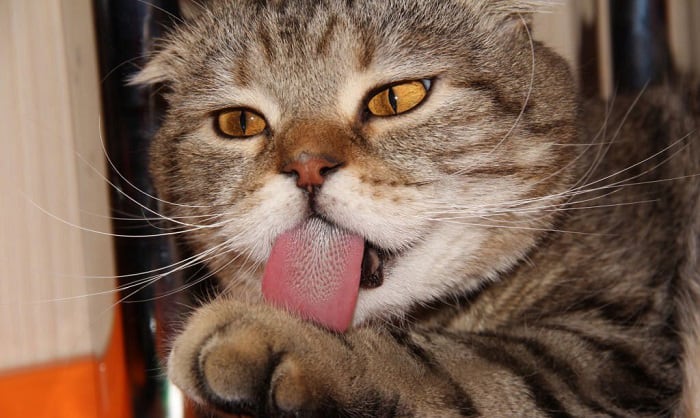 There is a possibility that cats may lose their papillae and this will bring some troubles to their daily life.

Losing their papillae means that some of the spines on their tongue will not be as scratchy as the others. This is most common for older cats.

Since the papillae are made out of keratin, just like human nails and hair, they can also break. However, the distinction is that papillae on a cat’s tongue do not regrow compared to our nails and hair.

Therefore, you will need to put more effort into helping them to still be able to live day-to-day despite losing their papillae. Some of the things that you could do to help are: 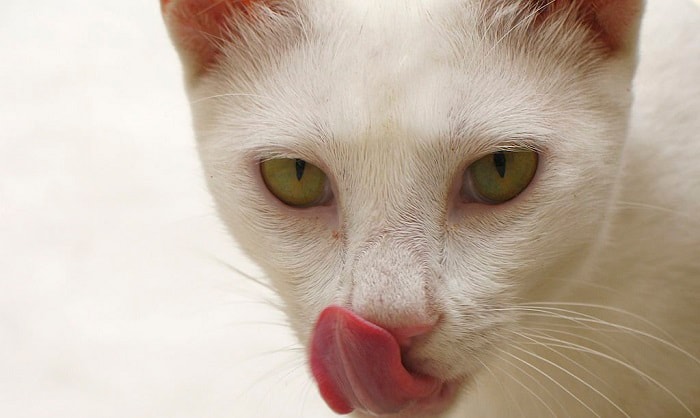 Why are cats’ tongues scratchy but not dogs?

Dogs have smooth tongues because they are not considered hunters. They are from a pack of wolves and are far from the cats’ classification.

Compared to a dog, a cat is a natural hunter. It utilizes grooming to maintain invisibility and not get preyed on by bigger animals.

This makes cats’ physique and natural features separate from the dogs’ and therefore, make them utterly distinct species, resulting in a different tongue texture.

Can a cat’s tongue be smooth?

Yes, some cats are born with smooth tongues. This is due to a genetic mutation.

Although this may sound alarming for you as a cat owner, a cat’s smooth tongue should not be worried about.

Felines with smooth tongues can still live normally just like every cat who has a rough tongue.

Why do big cats have rough tongues?

Lions have rough tongues, the same as tigers, leopards, and other identified felines. Their tongues have a similar shape and size as the cat’s papillae, the only difference is the number of spines on them.

The bigger the feline is, the higher the number of spikes on its tongue.

Can a cat’s tongue cut you?

You might be worrying if your cat can cut you due to their rough tongues. The simple answer is no.

You don’t need to worry if your cat could rip off your skin just because they are carnivores. The papillae on their tongue only serve as a tool to groom themselves and to help them eat properly.

Do other animals have rough tongues?

Absolutely! Aside from felines, other animals such as cows, penguins, and geese have scratchy tongues that they also use to help them eat.

Cows, specifically, also use their tongue for grooming and to remove some ticks feeding off of their bodies.

In this article, we have answered the question. “Why do cats have rough tongues?” and have discovered that it is not only a thing for felines but also other animals. However, regardless of their innocent look, having a rough tongue is proof of their roots.

It might sound scary but cats’ tongues do not bring any harm to humans. Similar to the standard function of tongues, theirs have functions that help them live every day.

Why Do Cats Knock Things Over? Are They Jerks?