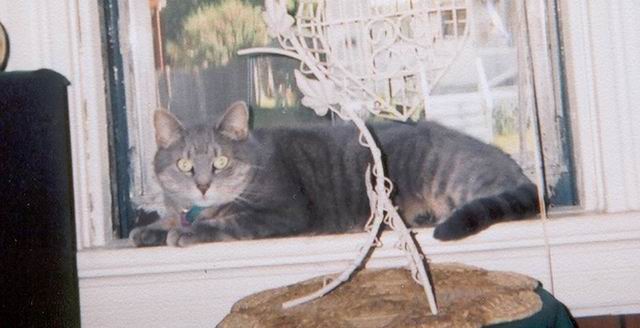 In July, 2002, Ashley was the first kitty that FVEAP was able to help. She had developed hermangiosarcoma on her back and desperately needed surgery in an attempt to save her life.

Her mom had her since she was six weeks old and she was now nine years old.

The surgery was performed in late July and appeared to be successful. Then, in September, Ashley had to go back into surgery to have another small lump removed. She came through the surgery well and recovered quickly. Her checkup revealed no sign of cancer and we all hoped that it was over.

Then in October, another lump was found and Ashley’s mom decided to not invade her any further and to make her as comfortable as possible for as long as possible.

Ashley passed away on Friday, December 27, 2002 with her mom holding her, petting her and talking to her.

Many people contributed, prayed, and sent lots of encouragement to Ashley and her mom during this very long and painful journey. We will all miss Ashley and will always remember her with love since she touched our lives so deeply. And we will always remember her mom for the love and compassion she showed Ashley during their nine years together. May they rejoice when they are united once again at the Rainbow Bridge. 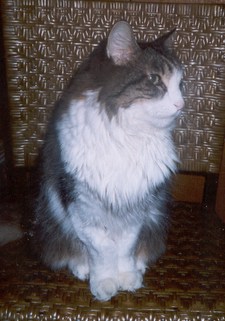 FVEAP Note: T.C. gave Charlotte 10 years of wonderful love and purrs. In return, in addition to her love, she gave him her commitment that she would do everything possible to help him when he became sick. Despite all the efforts, T.C. went to the Rainbow Bridge in early February. Here is the background to T.C.’s story:

“TC has been suffering for months without a definitive or accurate diagnosis. He does have a bowel obstruction, and I don’t know yet whether it is cancerous or even if it’s a tumor yet.

What was found from the very start of the preliminary exam by the specialist, was that TC has a very bad heart condition, and is nearly in failure, and all the subcutaneous fluids he’s been getting for his kidneys, which is another chapter in this unfortunate real-life story along with the bowel problem, has been nearly killing him by putting too big a load on his heart! A little while back, I even asked his regular vet if TC’s problems were in conflict with one another (meaning you treat one and it makes the other worse or decompensate), and remarkably she said, “no, IBD, Inflammatory Bowel Disorder and kidney failure do not conflict. If he had a heart problem, they would, but he does not have a heart problem.

Looking back is always clear–you have the conclusion, and you can think back and put the pieces together. Another example: His vet would listen to his heart with the stethoscope, and would sometimes say something like, “calm down TC, it’s OK, your heart is racing ’cause you’re scared.” But she didn’t recognize the symptom that is called a galloping heart rhythm, which indicates, I think she said Cardiomyopathy and an enlarged heart. TC is a large cat–well, a large frame now anyway. He’s down from 14 lbs in Sept. to 9 lbs now!

It has been torture to watch him suffer and waste away before my eyes. TC and I are both exhausted. Today he’s going to have the mass in his bowel looked at and biopsied, and in two more days of torture, I’ll get the results of whether it is cancer or not.

My poor sweet baby. TC and I have had 10 good years together, full of love and laughs–his playful antics have always delighted me, and I’ve missed that so much. It’s as though TC, for all intents and purposes, has been gone for months now, and I desperately want my baby back!” FVEAP Note: Later, after many tests and treatments, Charlotte wrote: “T.C.’s biopsies came back with a bad prognosis: In addition to having cardiomyopathy, and limited kidney function the treatments of which work against each other, the biopsies showed severe inflamatory disease of the duodenum, and the blockage in his colon as a type of sarcoma, a malignancy. The internist and the surgeon felt that, while they could operate to remove the tumor, that it would be putting him through a lot of trauma and it wouldn’t cure the cancer.

Then, late last night, his colon with some of the tumor prolapsed again, and after spending some time alone with T.C. at the emergency clinic, I decided that T.C. would come home with me, rather than go through the repair of the prolapse, general anethesia and all the discomfort of staying in a cage on I.V. fluid, and a collar, etc. I couldn’t bear to put him throught anymore. T.C. hadbeen letting me know in no uncertain terms, for about a week or so, that he was fed up with medicine, needles, vets and procedures.

He was snuggled in my arms in the exam room, and that’s when I decided that T.C. wanted to be with me at home, and not traumatized anymore. So, I took him home, we got settled, and he spent the night purring and snuggling in my lap while I sat up in bed. This morning I called around and found a husband and wife vet team whose practice is doing house calls. They came over late this afternoon, and while T.C. was in my lap, they gave him a sedative to put him to sleep like a pre-op. Then they administered a shot that stopped his heart.

It was the hardest thing I have ever had to do, but the circumstances and T.C. dictated it. I took my cues from T.C. more than the vets, and that gives me some peace.

FVEAP Note: Finally, Charlotte wrote “T.C. was buried as planned in his basket with his toys and catnip wrapped in his favorite “blanket,” which was a hand-woven shawl that I gave him to snuggle in. He’s surrounded by metal and stone to keep the critters out. On top of the flagstone is a Chinese garden stool that was in the living room that he used to hide under-as only cats can do-sticking out all over-when we played chase the ball down the hall.

“I celebrate that wonderful sweet face and bright eyes he had before illness changed him, and I grieve for the loss of that sweet face and bright eyes that used to engage me every day in play and conversation, and that I miss so much now! I wanted so desparately to make him well and to return to being the big, vital, beautiful sweet friend and companion, who I love so very much!”

Final FVEAP Note: We all came to know and love Charlotte and T.C. during their courageous fight and we look forward to seeing T.C. again when our fight, too is over. Hopefully we can be as courageous. 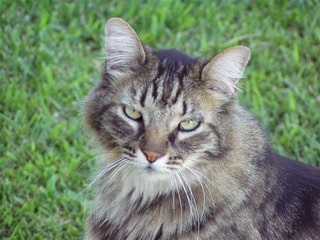 Note: A dear friend lost her beautiful Rocky recently and she made a donation to FVEAP in memory of Rocky. We are very sorry for her loss and we will make sure that her contribution will help other kitties.

Rocky left to cat heaven on Wednesday, August 30th. He had been with me for 12 years from the time he was a kitten. Although I knew it would be hard on me when he died, I am still surprised at not only the level of sadness I’m feeling, but also just how much I plain darn miss him.

He would always follow me around, scratching at the bathroom door to be let in so he could drink out of the faucet, climbing on my lap right on top of my newspaper, and meowing around my feet every time I opened a can of food. He loved getting into things that weren’t for him, file drawers, empty cardboard boxes and even gardening baskets, tomatoes and all!!

He was a such a scaredy cat that I often called him brave when he was the slightest bit adventuresome. I am grateful that he passed on peacefully with no illness or injury, just doing what he did best, lounging around
on the couch.

Please accept my donation in memory of Rocky to assist your organization for the work that you do to help cats.