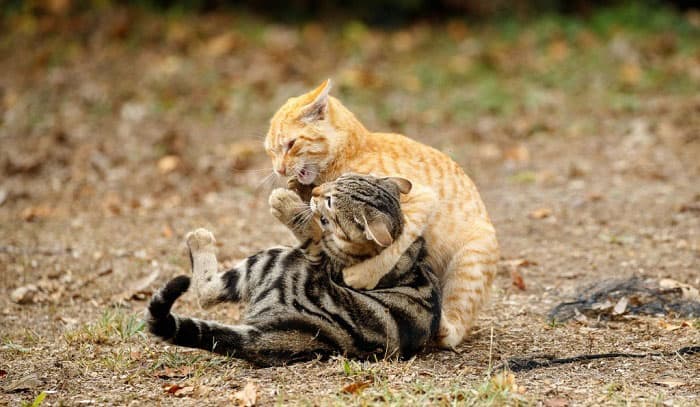 Many cat owners are concerned about their cat bullying other cat and wish to find a solution. Catfights can be playful at first, but there will be severe hurts when they go too far.

There are a variety of causes for this behavior, so when you’re trying to stop one cat from bullying another, figure out what’s causing it. After knowing the reason, it is easier to settle everything.

For cat owners who wonder ‘how to stop my cat from bullying my other cat?’ check out below.

How to Stop My Cats From Bullying Each Other? 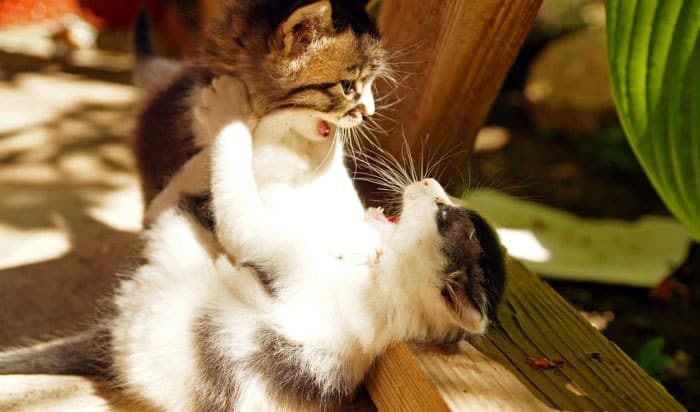 Cats become bored if they don’t have any entertaining activities; therefore, they fight with other cats for entertainment or to relieve stress. As a result, if you wish to keep your cat from bullying other cats, you should reduce tension and provide a fun and stimulating environment.

Provide a variety of toys and disperse them around the house to create a stimulating environment. You may use customized pheromone diffusers and place them in different areas to make the installations calm.

2. Provide separate items for each cat.

It would help if you gave each cat different things to get one cat to stop bullying another. Cats like to scratch their belongings, including toys, litter boxes, and, of course, their food bowls. The best way to ensure that cats get along is to provide their tools, ideally in different locations. After playing with or using anything, a cat is inclined to claim ownership of it, including you.

Conflicts about food cause many pet fights. That is why each cat should have its bowl of food. It’s a good idea to feed the cat in different rooms.

Make it a habit to feed your cat from their right bowl. Every cat should have a spot where you can always put her food. Such an arrangement prevents cats from competing with one another.

Once your pet has formed this habit, they will most likely return to their territory and ignore the others. However, keep an eye on things to ensure the bully isn’t attempting to intimidate the other individual.

Because many cats are naturally aggressive, they can get into problems for a variety of reasons. However, it would help if you did not scold your cat because there might be a variety of causes for this behavior.

Instead, divert their focus by flipping over an object that you believe would pique their interest. You should present a variety of toys that your cat hasn’t seen before; anything new will pique his interest. It’s critical to keep out of the conflict and find another way to rescue an injured cat quickly.

You can’t pick a favorite cat when you’re attempting to use love to stop cat bullying. If you favor one cat while neglecting the other, the gap between them will widen even further.

Cats are known to be devoted to their owners and even to mark their territory. Like a food dish, your pet may fight for you. That is why it is critical to respond with love to what they desire.

It would help if you split each pet’s time with you so that it does not interfere with the time of other cats. Doing so can help you avoid the younger cat bullying the older cat or vice versa.

6. Let the cats get to acquaint themselves again.

You can keep the cats apart for a few days and then reintroduce them to see whether they get along. The first meeting between cats is crucial since it will define the future steps.

If the introduction fails, your cat will most likely be unable to live together in the same habitat. As a result, you must be patient in your search for an appropriate way for your pets.

Is My Cat Playing or Fighting?

It is sometimes difficult to determine if a cat is playing or fighting. Here are some things you can consider:

How to Handle a Catfight

If a catfight breaks out, you should know how to stop it before any of your cats get harmed. But the essential thing is not to interfere with the battle; it will just scratch you.

The easiest technique to end up is to divert the cats’ attention away from the conflict. You can create a loud noise, for example, to get them to turn around and see what’s going on.

You may also get away from them, grab a toy, and yell at them to gain their attention. You may also clap your hands to attract them and entice them to come closer to you.

If they still don’t stop, you can scare them away by throwing any soft item near them. To avoid hurting them, you can use a cushion or a towel. The cats will become distracted and flee, forgetting about the battle for at least a few minutes.

Why Do Your Cat Bully Other Cats? 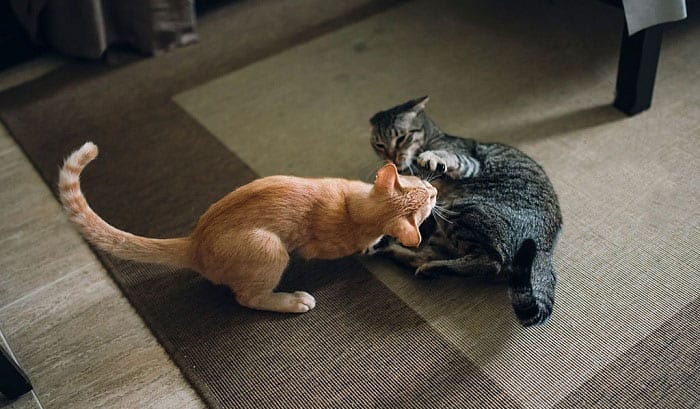 Cats don’t get into fights with each other for no cause. If they get along, they’ll start avoiding each other’s place and learn to tolerate it. On the contrary, it will progressively deteriorate, and you will see a few catfights as a result.

Here are some of the reasons why cats in the same house fight.

If you have two female cats, there’s a strong possibility they’ll start fighting when mating season comes around. The majority of these issues may be readily rectified by neutering the cats before they reach one year old.

Any changes in the house or environment might lead cats to get stressed, prompting them to bully or fight with one another. When their bed, feeding box, or litter box is relocated or modified, they are likely to become stressed and bully others.

This can also happen if you get a new cat or if one of your cats moves out or passes away. The older cat bullying kitten as a threat and began to harass him. Or if your new kitten is aggressive, the kitten bullying older cat at your home is inevitable.

Cats fight for territory due to a lack of room. Rubs, patrols, and urine marks are all ways cats leave their imprint on their territory. Other cats may be lured into their area, who then attack them as trespassing. Outdoor cats are more aggressive in their home territory, and the cat closest to the house generally wins the battle.

Cats might be easy to get along with by their owners, but getting along with other cats can be challenging. So, how to stop my cat from bullying my other cat? You can just follow the steps outlined in this article.

If the bullying becomes too much for you to handle, don’t hesitate to seek assistance from your veterinarian or feline specialists.